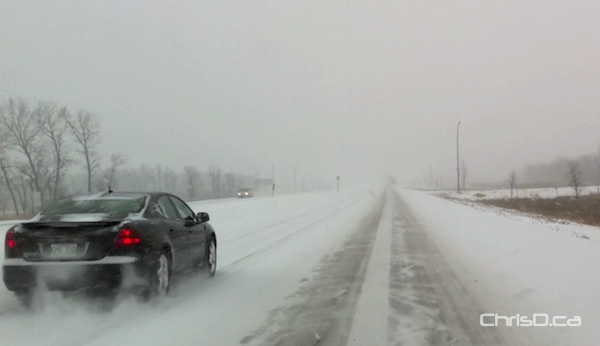 Areas of southern Manitoba could see more than 30 centimetres of snow this weekend. (CHRISD.CA FILE)

With the first major snowstorm of the year on Manitoba’s doorstep, preparations are being made to ensure roads remain clear and safe for drivers.

Environment Canada is calling for upwards of 30 centimetres of snow for the Winnipeg area and up to 40 centimetres in areas around Dauphin and Riding Mountain National Park.

The City of Winnipeg has road maintenance crews who will be working around the clock this weekend to plow roadways and sand streets. Ken Boyd, the city’s street maintenance manager, says crews will begin sanding Priority 1 streets Friday evening as the snow begins to fall. Priority 2 streets will then be sanded as needed.

Thirty-five sanders working in 12-hour shifts will be deployed based on the conditions.

“We’re ready to fight this storm as it hits us,” Boyd said.

Boyd says plowing will commence once snowfall accumulation is no longer manageable by sanding.

The snowfall may also have an impact on Winnipeg Transit and garbage collection. The city recommends bus riders check WinnipegTransit.com, or call 311 for any cancellations or delays. In the event of a heavy snowfall, keep all garbage carts off the street or backlane when snow plows are out. If Monday is your collection day, the city asks that you don’t put your carts out the night before to allow for snow clearing.

Across the province, Manitoba Infrastructure and Transportation will have its own crews out ensuring highways and provincial roads remain clear. Motorists are advised to give plows extra room to operate and not to attempt to pass a plow while in action.

The latest road conditions can be found by calling 511 or visit MB511.ca.