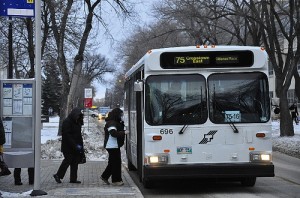 Students board a Winnipeg Transit bus on the University of Manitoba campus. (FILE)

Students at the University of Manitoba will vote this week on whether to adopt universal bus passes.

The vote would see the U of M join the University of Winnipeg Students’ Association (USWA) and negotiate for funding of the “U-Pass” with the city and province.

The idea was overwhelmingly favoured last month during a referendum and would allow students to ride unlimited on Winnipeg Transit buses during the regular school year.

The maximum cost of the pass would be $170 annually, but the final price still requires negotiation from both sides. The current price of a post-secondary bus pass is $492.80 for the fall and winter semesters.

Students will vote on the U-Pass November 14-16.