Goldeyes Lock Down Forney Through 2015 Season 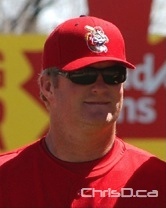 The Winnipeg Goldeyes have extended the contract of field manager Rick Forney through the 2015 season.

Forney most recently led the Fish to the 2012 American Association Championship in his seventh season as the team’s manager.

“Our organization prides itself on the product we offer to our fans on and off the field and Rick is the biggest reason for our continued success on the field,” Goldeyes GM Andrew Collier said. “He diligently works to consistently build one of the best independent baseball teams on a yearly basis.”

Forney, 41, has been with the Goldeyes for 16 years. In addition to his time in Winnipeg, Forney spent five years in the Orioles system and half of the 1999 season in the Atlanta Braves organization. He reached Triple-A with the Orioles in 1995.

← Previous: CONTEST: Win Tickets to 'Rock of Ages' the Musical Next: Gift-Giving Program for Seniors Launches for the Season →
Tags: Baseball | Winnipeg Goldeyes