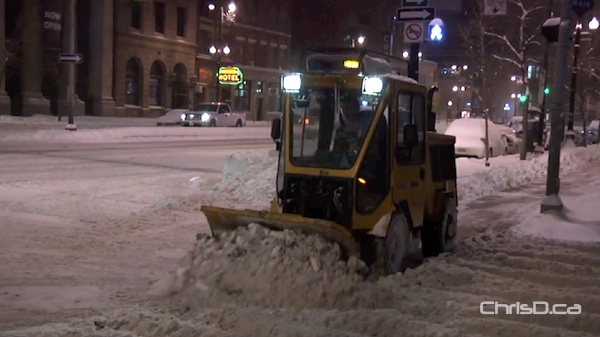 A sidewalk is plowed on Main Street in downtown Winnipeg on Sunday, November 11, 2012. (CHRISD.CA FILE)

The City of Winnipeg is returning to some streets that may have been missed during the first round of plowing earlier this week.

The city is plowing priority 3 (residential) streets in the coming days to ensure snow is cleared, while still maintaining its regular plowing schedule. A parking ban will not be in place while streets are replowed.

“Overall our residential plowing operation has been on track and on schedule with only a few streets that have been missed,” said Ken Boyd, manager of streets maintenance. “Since plowing operations on major streets began Saturday, more than 300 pieces of snow clearing equipment have been involved in this entire operation.”

The city is asking residents not to call 311 to report an unplowed street, as crews will get to it eventually before Thursday.

Zone C will be plowed beginning at 7 p.m. tonight.