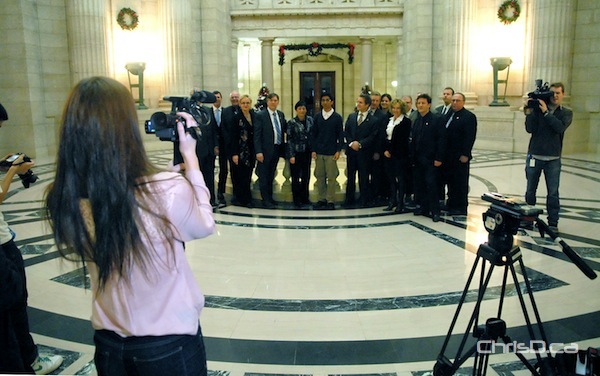 Students from Fort Richmond Collegiate film an endorsement from Progressive Conservative MLAs at the Manitoba legislature as part of the ‘Finding Undeniable’ contest on Monday, November 26, 2012. (STAN MILOSEVIC / CHRISD.CA)

Students from Fort Richmond Collegiate descended on the Manitoba legislature on Monday as part of their ongoing effort to win $100,000.

The south Winnipeg high school is competing in the Finding Undeniable contest put on by Under Armour in an effort to purchase new sporting equipment. Having already gained the support of civic politicians, the students have now also been backed by the governing NDP and Progressive Conservatives in their bid to win the national contest.

Through a series of challenges, the school is earning points toward their goal as well as collecting public votes through FindingUndeniable.ca. So far, students have amassed public support from 11 city councillors and Mayor Sam Katz, as well received press from a number of local media outlets.

If successful, Fort Richmond would like to use the funds to start a snowshoeing club. The funds will be awarded to the winning school split into two parts — $75,000 to be used for a series of sporting initiatives and equipment at the school, and $25,000 to be used on anything at the discretion of student leaders.

← Previous: Seniors to Remain at Home Longer Under New Program Next: City to Establish Winnipeg Police Board →
Tags: