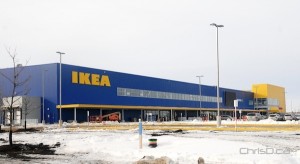 The most anticipated retailer in Winnipeg’s history is about to finally open on Wednesday.

IKEA will anchor the massive 390,000-square-foot space at the corner of Kenaston Boulevard and Sterling Lyon Parkway in the south end of the city. On Monday evening, media and special guests were invited for a preview shopping event at the new store.

Construction of the Swedish furniture giant’s newest store was on time and on budget, something not seen in Winnipeg with some of the other high profile projects being developed. The anchor tenant of the future Seasons of Tuxedo development officially broke ground just over three years ago last week.

“We were lucky to have over 4,000 people apply online (to work at the store), so we feel like we truly have the best talent that Winnipeg has to offer,” said IKEA Winnipeg spokeswoman Maegan Sheskey. “We’ve been able to hire just about 400 co-workers from this market.”

IKEA originally put the call out for 300 staff back in July and was overwhelmed by the amount of applications it received. Store manager Stephen Bobko said during a construction tour in September that they had nearly filled their quota by that time.

The store has planned opening day festivities with a ribbon cutting by local dignitaries and several gift card giveaways. Extra staff from as far away as the United Kingdom have been brought in, as well as 12 Winnipeg police officers to handle traffic and crowd control.

The official opening is Wednesday at 9 a.m. The public can begin lining up later tonight, or technically at 12:01 a.m. tomorrow morning.

It’s the first time IKEA has expanded into a new Canadian market since opening its Montreal store in 1982.