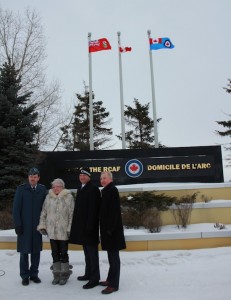 The “Home of the RCAF” sign was dedicated along with the raising of flags in recognition of the Force’s role in the community.

“The Royal Canadian Air Force has a deep history and active presence in our community,” said Barry Rempel, president and CEO of the WAA. “Winnipeg Airports Authority is proud to show our support of the men and women of the RCAF and this visual display is one way of showing appreciation of their efforts on behalf of our community and that of our Country.”

The sign faces eastbound on Wellington as visitors depart the airport.