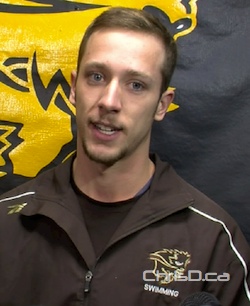 The 20-year-old bested his mark set earlier in 2012 and placed first in the 50m butterfly and 50m backstroke. Perron is competing in the 2012 Prairie Winter Invitational at Pan Am Pool until December 2.

It’s the second time in a week Perron has smashed previous records. He won the men’s 50m breaststroke in a time of 28.05 and set a new Bison record at the 2012 Canada Cup in Toronto on November 24.

Perron said earlier this week he hopes to eventually gain a podium spot at the CIS championships and make the final at world trials.

“I’d like to be in the top eight there, and then keep going. I’ve got another four years at least,” he said.

← Previous: Canopy Skating Rink Opens at The Forks Next: Movember Wrapping Up with a Shave-Off →
Tags: University of Manitoba