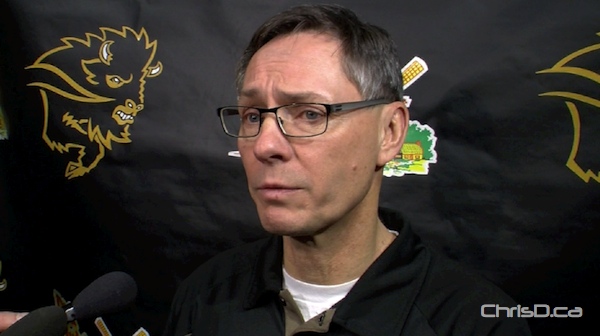 The Manitoba Bison men’s hockey team has a challenge ahead of themselves this weekend as the No. 1-ranked Alberta Golden Bears come to town.

The Bisons, who are ranked tenth in the latest CIS poll, have a 5-1 record at home this season. Alberta, meanwhile, enters the two-game series on a 10-game conference winning streak.

“It’s going to be a real challenge for us, but we’re up for it,” Bisons head coach Mike Sirant admitted this week. “We’ve been playing really well lately and we’ve kind of overcome one hurdle that’s been a barrier for us in putting pucks in the net.”

The Bisons scored 13 goals in two games last weekend against the Regina Rams and won the series.

“To do that in our conference is very impressive and it was so good for our players… for that confidence. It was great to see our guys rewarded for their effort in execution. And of course we have to transfer that into our games against Alberta. They’re going to be tight games.

Manitoba’s Ian Duval leads the Bisons with three goals and 14 assists this season, while also tied for fifth in Canada West scoring with 17 points.

Puck drop is 7 p.m. tonight and Saturday at Max Bell Arena on the U of M’s Fort Garry campus.

Next door at the Investors Group Athletic Centre, Bison women’s and men’s volleyball takes on UBC. Game time is 6 p.m. and 8 p.m. both nights, respectively.