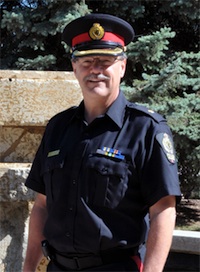 The Brandon Police Service is getting a new chief.

Inspector Ian Grant will take over for outgoing Chief Keith Atkinson, who will retire on January 25. Atkinson announced his plans to leave the force during a council meeting back in August. He’ll have served as the top cop for just over six years.

Grant has been with the BPS for 28 years and has worked in the patrol division, traffic section, community cervices, Crime Stoppers section, crime division, administration section and most recently as the Inspector in charge of Operations.

“There’s a real need I think to listen to what people have to say in the community, as well as the dedicated people we have working in the organization to listen to their ideas as well,” Grant told Brandon radio station CKLQ. “That’s part of my plan… to get input from various parts of the community.”