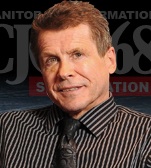 Young will assume the role of news director at CKLQ in Brandon starting in January, he told ChrisD.ca late today.

Young was at the Information Superstation for just over four years.

Prior to CJOB, Young worked in several other areas of local media, including as a news anchor on the former MTN TV station (now Citytv) in the 1990s.