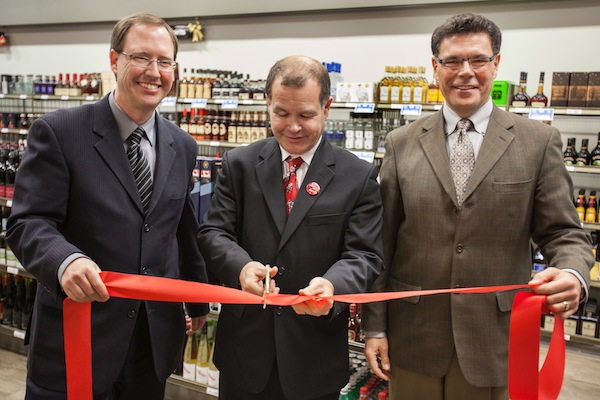 Jim Rondeau (centre), Minister responsible for the Liquor Control Act, cuts the ribbon on the new Liquor Mart Express inside the Safeway Pembina Village store on Thursday, December 6, 2012. Rondeau was joined by John Graham of Canada Safeway Limited and Al Roney of the Retail Stores for Manitoba Liquor and Lotteries. (MLCC / HANDOUT)

The Manitoba Liquor Control Commission-run store will allow grocery shoppers to pick up a bottle of wine, beer or other spirits while checking off the other items on their shopping list.

The concept was announced in May 2011 by the province as part of the New Hospitality Strategy.

“These new locations allow Manitobans to shop for groceries and beverage alcohol in one place, while ensuring that these products continue to be sold in a socially responsible manner,” said Jim Rondeau, Minister responsible for the Liquor Control Act.

Manitoba Liquor Mart employees will run the Express store, located 2155 Pembina Highway, similar to the way a full service Liquor Marts location is operated. The store is 755-square-feet in size and located behind the check?out in the area.