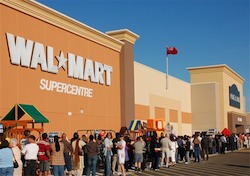 Walmart Canada will once again operate many of its stores 24/7 leading up to Christmas Eve.

The company said Friday it will open 200 of its 373 stores nationwide around the clock beginning today.

“Our research shows that customers are waiting to complete their Christmas purchases so we expect our marathon shopping to be very well received this year,” said Jim Thompson, Walmart Canada’s chief operations officer.

Walmart says the extended hours please everyone from busy moms to shift workers at this time of year.

Manitoba stores in Flin Flon, Selkirk, Thompson and Winnipeg will all open under the new hours, excluding Sundays. Exact schedules can be found on Walmart’s website.