Electrical Museum Looks Back at History of Christmas Lighting 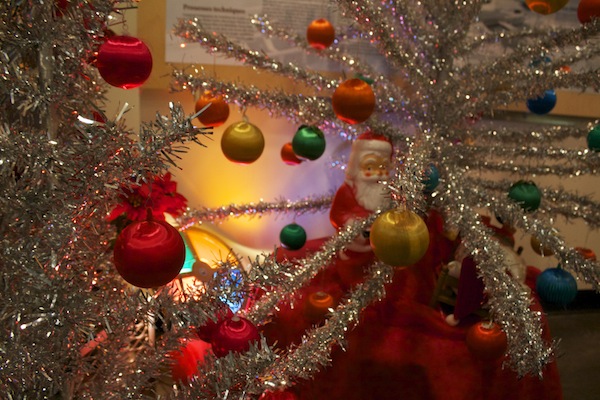 ‘All That Glows: Then and Now’ runs until January 3, 2013 at the Manitoba Electrical Museum. (EDEN RAMSAY PHOTO) 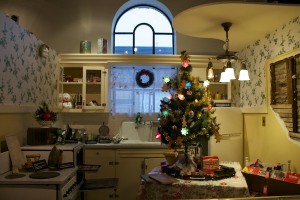 The Manitoba Electrical Museum and Education Centre located is on 680 Harrow Street. I’ve often driven past here on my way to Pembina Highway, wondering what it was all about. I read in the Uptown portion of the Winnipeg Free Press that there is now an exhibition on display there titled, All That Glows: Then and Now. This is an exhibition of Christmas lighting from the 1880s to today. It sounded interesting so I decided to check it out.

The place has a two-level display describing how electricity has evolved to effect both Manitoba and the world from the 1880s to the present day. For the All That Glows exhibition, Christmas-themed display cases and decorated Christmas trees were put throughout the building to show how Christmas traditions have changed over the years.

This is what I learned from the exhibit:

From the 1880s to the 1910s, Queen Victoria made the Christmas Tree popular. Natural fruits and homemade crafts were used to decorate the tree. Real candles were also used on trees back then and tree “skirts” were used to catch wax drippings. Trees lights were invented during this time. A “wireman” was hired to light trees since most homes were not hooked up to electricity yet. Lights were very expensive during this time so they were often rented. The use of Christmas greetings increased during World War 1.

In the 1920s to the 1930s, figural decorations were popular. Ornaments were often made of cardboard or beeswax. More homes became wired up to electricity at this time and the cone shaped bulbs became common. The Depression brought cheaper lighting and ornament production with it. 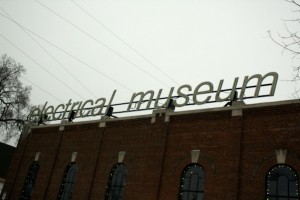 During the 1940s to the 1950s, tinsel and tin reflectors were often used in decoration. Blown glass ornaments where imported from overseas. A “bottle brush” material is used to make the first artificial trees. The company, NOMA, cashed in on the novelty lighting craze with their “bubble lights.” Electrical gifts were uncommon at this time, but the television set was the “must-have” gift.

A 1940s kitchen that has just been hooked up to electricity was recreated for this part of the tour. There was even products and appliances from that time in the kitchen, making it look very realistic.

After World War II, electricity in homes became mainstream and exterior home illumination decor increased. From the 1960s to the 1970s, Miniature fairy lights were popular. Aluminum Christmas trees were combined with light-up motorized colour wheels to create a dazzling kaleidoscope effect. Plastic ornaments and foil garlands were used. Decorations often had space age influences. The first man landing on the moon created a general space craze during this time.

In this part of the exhibit was an impressive giant robot was made out of household appliances and holding up Christmas lights. In front of the robot were buttons to light up different parts of the robot. Around the robot were piles of toys that were popular at different times throughout the 20th century. 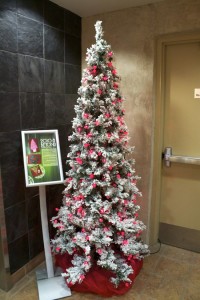 In the 2000s to the 2010s, an anything-goes attitude took over the Christmas decorating world. Modern, traditional and retro-styled decorations were all common. Energy efficient LED lights (or light emitting diode) and fibre optic lights were introduced. Outdoor lighting sets became more advanced with sound and animation available as options.

In 2010 and beyond the trend has become designer-themed trees. Black ornaments on white trees and white ornaments on pink trees are some popular styles. Chocolate, lime and turquoise coloured trees are available for those looking for something a little different. LED lights continue to be used in various shapes, sizes and colours.

All That Glows: Then and Now runs from now until January 3. Admission is free. I recommend checking it out to see how electricity and Christmas decorating has evolved in our city from the 1880s.

← Previous: MTC Partners with Local Eateries for 'Dinner and a Show' Next: Slick Streets Contribute to Multiple Crashes →
Tags: Christmas