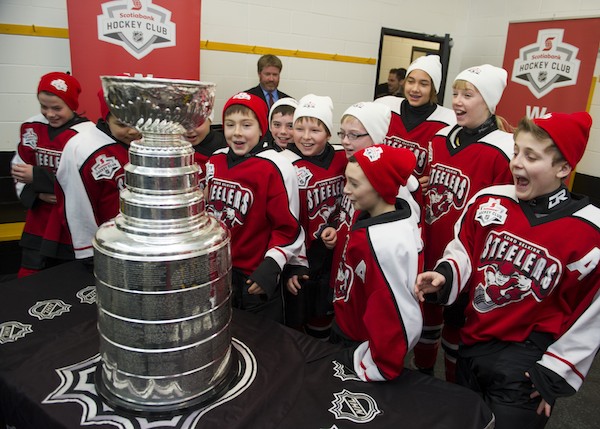 Players from the Lord Selkirk Steelers minor hockey team received the surprise of a lifetime when the Stanley Cup made a visit to their dressing room before practice on Sunday, December 9, 2012. The Steelers were randomly selected to receive the surprise as part of the Scotiabank Community Hockey Sponsorship Program. (DAVID LIPNOWSKI / SCOTIABANK / HANDOUT)

Members of the Lord Selkirk Steelers hockey team received a surprise of a lifetime before their practice on Sunday.

The 11A1 squad was greeted with the Stanley Cup as part of the Scotiabank Community Hockey Sponsorship Program. The cup made its way to the East Selkirk Arena and was placed in the team’s dressing room for a chance to get up close with the piece of NHL hardware.

The Steelers are part of the program, which sees a $1,000 grant given to each branch across the country to sponsor a local minor hockey team. The program supports more than 3,700 minor hockey teams in communities across Canada through the Scotiabank Bright Future philanthropic program.

“The kids had absolutely no idea this was happening and it was heartwarming to see their faces light up,” said Todd Cook, the Steelers’ head coach. “I’m thrilled Scotiabank provided our team with the opportunity to be part of such an inspirational initiative, and I’m sure every player will remember the moment for the rest of their lives.”

Scotiabank also presented the Lord Selkirk Steelers with a $500 donation.