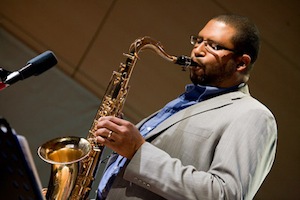 Saxophonist Jimmy Greene’s daughter, Ana, was among the victims killed Friday in a school shooting in Newton, CT. The family previously lived in Winnipeg. (JAZZ WINNIPEG)

A former Winnipeg elementary student is among the victims of the tragic shooting rampage that happened Friday in Newtown, Connecticut.

Ana Marquez-Greene, 6, attended Sandy Hook Elementary School along with her brother, Isaiah, who wasn’t injured in the shooting. Greene’s parents recently moved the family to Connecticut from Winnipeg in July.

Ana’s father is Jimmy Greene, a well-known American jazz saxophonist who taught at the University of Manitoba’s Faculty of Music for three years and performed on the local jazz circuit.

On Friday evening, about 60 mourners gathered at Whyte Ridge Baptist Church where the family were once parishioners.

Before moving to the U.S., Marquez-Greene attended Linden Christian School. Late Friday, the school released a statement asking the public to “uphold the Marquez-Greene family, as well as the many individuals impacted by the tragedy, in prayer.”

Twenty-eight people were killed in the mass shooting, including 20 children.

Greene recorded a special song for his daughter called “Ana Grace” for his 2009 album, Mission Statement. Listen below.