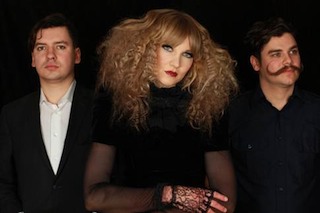 The band is celebrating the release of their sophomore album, Anhedonia, which comes out February 5. The album has been described as “a highball of blood and glitter, the album holds a darkly cinematic yet decidedly rock n’ roll esthetic.”

This Hisses is comprised of Julia Ryckman, Patrick Short, and JP Perron.

Tickets for the show are $20 at the door, or $15 in advance at the West End Cultural Centre, Ticketmaster, Music Trader, Into the Music and Winnipeg Folk Festival Music Store.