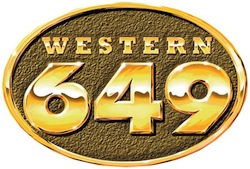 The Western Canada Lottery Corporation presented Kehler with his winnings at a press conference at the Delta Winnipeg Hotel.

Kehler bought the ticket on a whim December 8 after his wife asked him to go to the store and get her a cinnamon bun. Reluctant to make the trip at first, Kehler eventually budged and fulfilled his wife’s request for a sugary treat.

Kehler picked up a pack of six cinnamon buns at the Safeway at 3393 Portage Avenue, and also a five-pack of Western 649 tickets.

The next day, he checked his tickets at a local gas station and found out he had won.

“I saw a one with a whole bunch of zeroes and a two,” Kehler said. “I ran, grabbed a pen, signed it, and then took it to the counter to check.”

The couple and their two young children plan on taking a trip to Disney World, as well as pay off their mortgage. However, Kurtis said the first thing he’ll do is buy new windshield wiper blades for his 2005 pickup truck.

The last time the WCLC publicly introduced a big winner was on October 30. Yvette Reimer of Grunthal, Manitoba claimed a $1M prize as won on a Lotto Max ticket.