Chief Nepinak Heads to Ottawa in Support of Hunger Strike 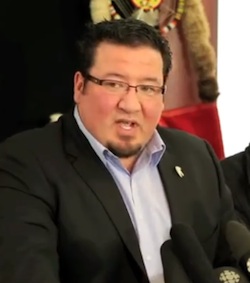 Grand Chief Derek Nepinak of the Assembly of Manitoba Chiefs is in Ottawa today to support the efforts of a fellow chief currently on a hunger strike.

Chief Theresa Spence of the Attawapiskat First Nation has been on a hunger strike since December 10 in her bid to meet with Prime Minister Stephen Harper or the Queen’s Canadian representative. Spence hopes to engage in a meaningful discussion on issues affecting First Nations people.

“I’m calling on all First Nations people across Canada, as well as all of our supporters from Canada and the world to converge on Ottawa now,” Nepinak said. “Fly, drive or otherwise and demand that the conditions of breaking the fast be met by this Prime Minister. If this Prime Minister fails to meet the conditions and this powerful Attawapiskat Chief passes, the long silent war drums of our people must ring loudly in the ears of everyone.”