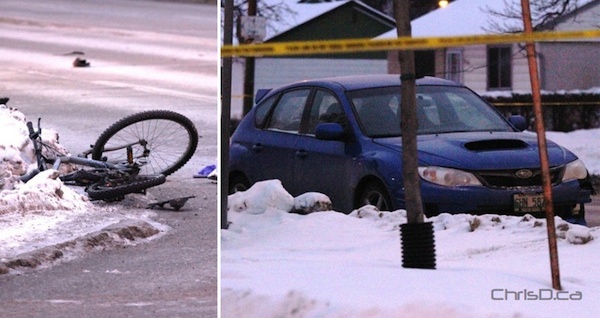 A bicycle sits damaged at the scene of a crash on Regent Avenue West between Plessis Road and Brewster Street on Sunday, December 22, 2012. (HOWARD WONG / FOR CHRISD.CA) 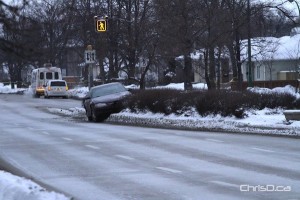 A vehicle rests on the median near the scene of a serious crash involving a cyclist on Sunday morning. (HOWARD WONG / FOR CHRISD.CA)

A male cyclist died to hospital after being hit by a vehicle on Regent Avenue West early Sunday.

The crash happened at around 4 a.m., forcing Winnipeg police to close Regent between Plessis Road and Brewster Street.

Police say the cyclist was struck by a vehicle travelling westbound on Regent Avenue.

Two vehicles with front end damage could be seen nearby, including a vehicle that had driven up on the centre median.

Police have a man in custody who is facing charges. Alcohol also appears to be a factor in the collision.

The name of the deceased isn’t being released.

Regent Avenue in both eastbound and westbound directions was closed until 2 p.m.

UPDATE: Monday, December 24 — Jesse Benjamin Coutu, 32, of Winnipeg has been charged with impaired driving causing death and failing to remain at the scene of an accident causing death. He was detained in custody.