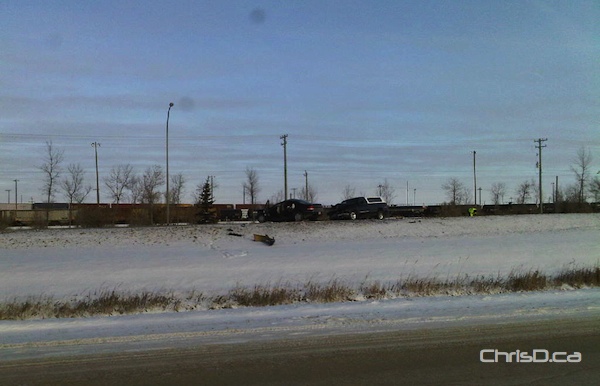 Two vehicles sit damaged on Fermor Avenue after a crash early Monday, December 24, 2012. One man has since succumbed to his injuries. (SUBMITTED PHOTO)

A two-vehicle crash Monday morning has killed a man and left two other people hospitalized.

Winnipeg police were called to Fermor Avenue just west of the Plessis Road overpass at around 7:45 a.m.

Three adults, two males and one female, were transported to hospital. One man has since succumbed to his injuries, while the other two occupants remain in stable condition.

Details on what caused the crash aren’t known at this time, but a pickup truck and sedan could be seen with front end damage.

UPDATE: Wednesday, December 26 — The deceased has been identified as Matthew Francesco Grestoni, 25, of Winnipeg.