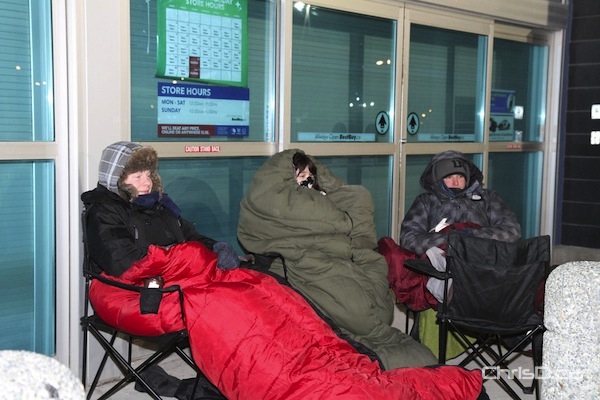 Charles Clarke, Janelle Flett and Derek Kufley wait in line outside Best Buy in St. James to purchase TVs and a camera on Boxing Day. (HOWARD WONG / FOR CHRISD.CA)

Hundreds of people braved the bone-chilling winter temperatures on Wednesday to snag Boxing Day deals bright and early. Actually, way before the sun even came up, where it felt like -36°C with the windchill.

Winnipeggers stood in line for hours — some even skipping Christmas dinner — to secure their spot for a hot deal. Best Buy and Future Shop in St. James were the usual spots where crowds formed early for a chance at saving hundreds of dollars on electronic items.

The first group outside of Best Buy arrived at 6 p.m. and brought sleeping bags to keep them warm. Once the doors opened, an estimated 200 people outside made a mad dash to pick up whatever may have been on their target list. Many Boxing Day revellers make multiple stops and are set on getting in and out of a store as fast as possible to beat lineups elsewhere.

Most of the big name electronics retailers opened their doors at 6 a.m., while Polo Park Shopping Centre began greeting customers at 8 a.m.

According to a new BMO poll released on Wednesday, 62 percent of Canadians are expected to take part in Boxing Day this year.