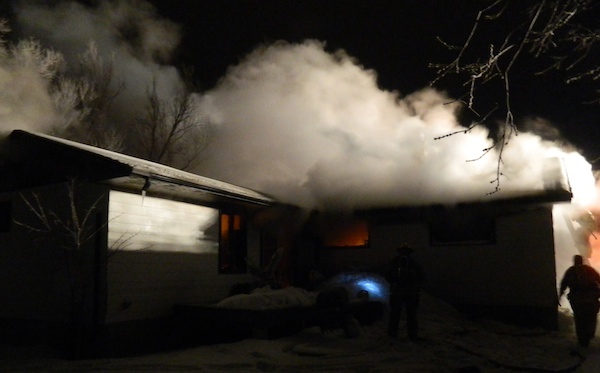 Smoke pours out from a home on Autumnwood Drive in Gimli on Tuesday, January 1, 2013. (RCMP HANDOUT)

Nine people safely made it out of a home in Gimli after it went up in flames early Tuesday morning.

Firefighters were called to Autumnwood Drive at about 4:30 a.m. as smoke billowed from the residence.

All of the occupants — ranging in age from 12- to 41-years-old — were taken to the local hospital for care. Two people — an 18-year-old man and his 41-year-old father — remain in hospital in stable condition.

The cause of the fire has been attributed to careless cooking and is considered accidental.

Damage estimates are not available, but RCMP say the residence sustained extensive damage.