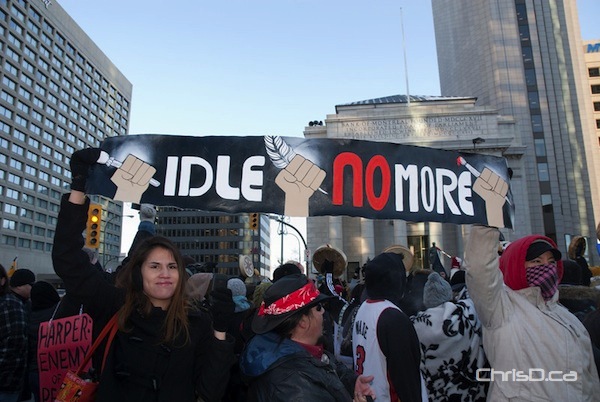 Protesters hold up a sign at Portage and Main as part of the Idle No More movement in Winnipeg on Monday, December 31, 2012. (TED GRANT / CHRISD.CA FILE)

The Idle No More movement will take their message and traffic blockade to the west end of the city this afternoon.

Protesters are set to rally at Portage Avenue and St. Charles Street at 1 p.m., according to a Facebook page.

The rally follows days of similar protests in other areas of the city — most recently a traffic stoppage at Portage and Main on New Year’s Eve.

The nationally-driven campaign is protesting federal Bill C-45 on First Nation treaty rights and other pieces of legislation.

About 150 people are expected to attend the peaceful rally. Previous events have included a traditional aboriginal round dance, drums, and protesters carrying signs to communicate their message.