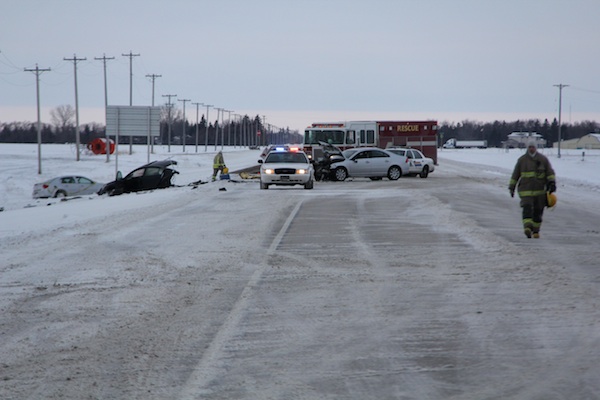 The collision, which happened at Loudoun Road at about 7:30 a.m., split one of the involved vehicles in half. Pieces of metal and plastic from the other vehicles involved could be seen strewn about the roadway and into the ditch.

The man driving the Nissan was taken to hospital with non-life threatening injuries. The other woman wasn’t injured.

RCMP and emergency personnel remained on scene for several hours.

Numerous other crashes were reported in and around Winnipeg early Wednesday as roads were slick from a light dusting of snow overnight mixed with mild temperatures. It was a similar situation late Tuesday afternoon during the rush hour commute when vehicles were sliding off the Perimeter Highway.

← Previous: Dragons' Den Auditions in Winnipeg February 2 Next: Hockey Sessions to Get Women in the Game →
Tags: Accident | RCMP