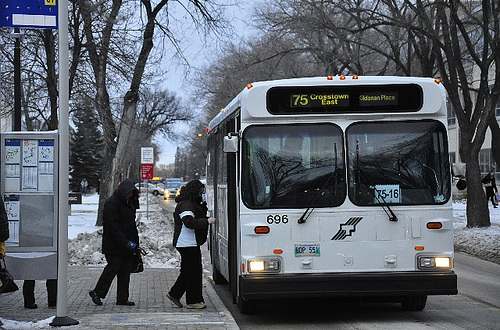 Students board a Winnipeg Transit bus on the University of Manitoba campus. (FILE)

Mayes wants $800,000 from the city’s operating budget to fund having Winnipeg police cadets on buses for the safety of passengers and drivers.

“The cadets could be deployed on those routes or in those areas that transit managers believe need the most assistance. The cadets’ role could take the form of responding to calls, or actually riding the bus in certain circumstances,” Mayes said.

The idea is being modelled after a similar implementation of transit safety measures in Edmonton.

“We have made some important strides to increase safety on our buses in recent years, such as the introduction of multiple cameras on each bus, but my amendment offers a first step towards improving transit safety and addressing the rising number of assaults which have been reported.”