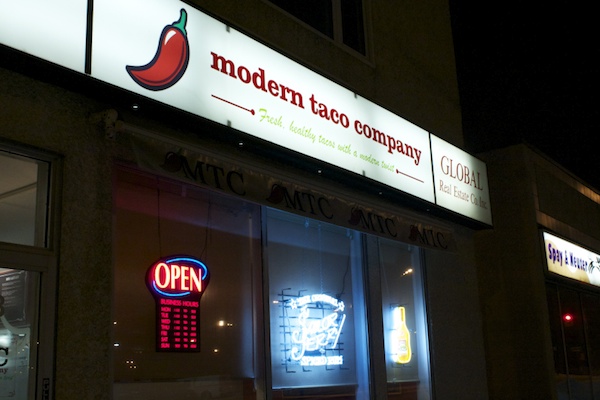 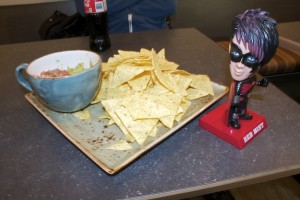 This week I decided to feature a new fixture in the Winnipeg Mexican food scene, Modern Taco Company. The small place on 612B Academy Road that opened last month is definitely not small on options.

The many drinks available include standards such as pop, juice, iced tea and lemonade. The place also offers different coffee options including Mexican hot chocolate and a Mexicano mocha latte. There are quite a few alcohol options as well such as beer, tequila by the shot, marguerites and daiquiris with four different choices for each.

I ordered tortilla chips to start out with. These came with guacamole and pico de gallo for dipping. These tasted homemade and fresh. 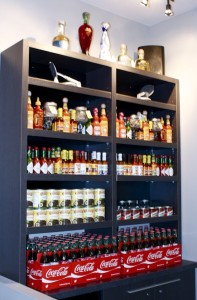 The place mostly offers different kinds of tacos. These are grouped into meat, veggie tacos, and fish tacos. You can also order a “naked taco” which is any taco that comes in a bowl without the tortilla, with your choice of slaw or Spanish rice. Quesadillas are also available, and sides such as soup, Spanish rice and slaw. There are also a number of breakfast options available with no set breakfast time. Customers have the option of eating breakfast for dinner if they want to change things up.

I decided to get three meat tacos and one fish one for variety. The tacos are small which is nice because you can try a bunch of different ones to make a complete meal.

The jerk chicken taco was not too spicy. Instead it was topped with fresh tasting, caramelized pineapple and cilantro. This gave it an overall light and fruity taste.

The pescada taco was very good with grilled fish, guacamole, slaw and jalapeno vinaigrette. It tasted generally tangy but the grilled fish and guacamole added a more creamy taste to it which was nice.

The tacos I tried are generally very mild in taste. This is a good thing if you are not a fan of the fiery spiciness that is associated with Mexican food. However, if you do like to kick your food up a notch there are many different kinds of Mexican hot sauces available for customers to use on their foods. Modern Taco Company also offers three homemade salsas to customers which include a mild, medium, and very hot spiced option.

My favourite thing out of my order though has got to be the chocolate caliente cookie. Two dark chocolate cookies were brought out to me. They were topped with a light sprinkling of sea salt to balance out the rich sweetness of the chocolate in the cookies. However, these were not your ordinary cookies. These chili powder filled cookies packed a punch. It was the spiciest cookie I’ve ever eaten. I love spicy foods so I really enjoyed this Mexican take on the chocolate cookie.

I will definitely be back to try some of the Mexican breakfast options this place offers. I haven’t really tried a lot of Mexican breakfast so I am looking forward to trying out their huevos rancheros, huevos y patatas and breakfast quesadillas, all of which come with pico de gallo and potatoes.

That is in addition to a side order of the chocolate caliente cookies, of course.