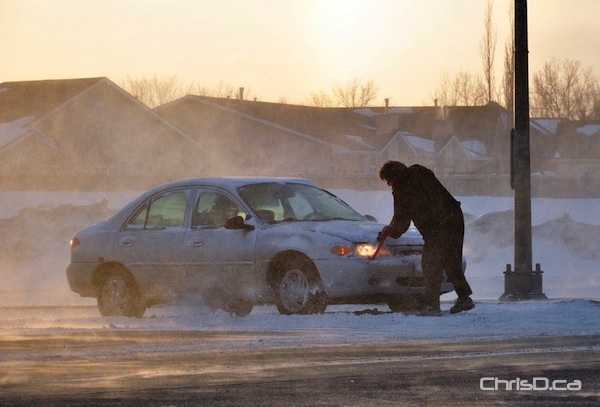 A Winnipeg motorist clears the snow off their car off in this file photo. (MARC EVANS / CHRISD.CA)

If you didn’t plug your vehicle in overnight, hopefully it started this morning.

Winnipeg was plunged into a deep freeze over the weekend, which won’t be releasing its grip until at least Saturday.

The high today will only hit -22°C, but will feel like -40°C with the wind, which will be gusting to 20 km/h from the northwest. The upside? At least the sun will be out.

During these conditions, frostbite on exposed skin may occur in less than 10 minutes.

The rest of the week will be equally as chilly, as the national weather office predicts daily daytime highs in the mid to low twenties until Saturday, where the mercury will rise to -15°C.

← Previous: Lululemon Founder to Be Honoured by University of Manitoba Next: CONTEST: Win a U of M Bisons Prize Pack →
Tags: Weather | Winter