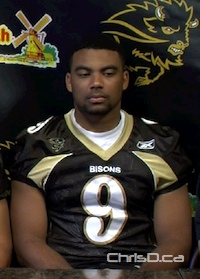 University of Manitoba Bisons football player Nic Demski has been selected to join the roster to play in the 2013 International Bowl.

Held in Austin, Texas on February 5, Demski will make up the World Team of 26 Canadians that plays Team USA.

The 19-year-old running back/kick returner follows in the footsteps of Bisons Anthony Coombs and Evan Gill, who made the World roster in 2012.

“This is another great opportunity for Nic to gain experience and highlight his tremendous skills while playing at an international level,” said Bisons head coach Brian Dobie.

Demski finished his second season at Manitoba and was named a 2012 CIS First Team All-Canadian at the kick returner position and also a 2012 Canada West All-Star for kick returner.