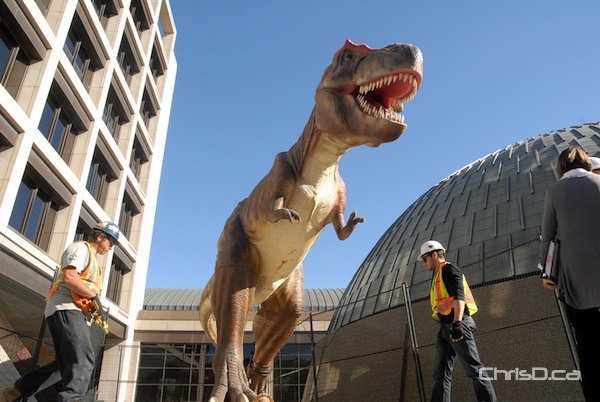 The life-sized Tyrannosaurus rex outside of the Manitoba Museum is standing still due to cold weather recently. (STAN MILOSEVIC / CHRISD.CA FILE)

With Winnipeg temperatures hovering around -30°C the past few days, the Manitoba Museum’s life-sized Tyrannosaurus rex has been out of commission.

The fixture is located at the front of the museum to promote its ongoing “Dinosaurs Unearthed” exhibit.

“The T-Rex cannot be operated when the temperature is below -20°C. There’s a heating control thermostat that it’s hooked up to, so it turns off automatically,” said Bert Valentin, the museum’s acting manager of operations. “People will know when the temperature rises above -20°C, because the dinosaur will start to move and roar again.”

With the weather set to warm up by the weekend — with “warm” meaning about -13°C — the moving dinosaur should return to full motion.

Dinosaurs Unearthed opened on October 6, 2012 and is a dynamic, experiential dinosaur exhibition that allows guests to participate in the larger-than-life world of dinosaurs. The exhibit runs until April 8, 2013.