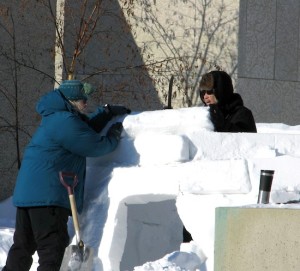 A team from the Manitoba Urban Inuit Association (MUIA) constructs an igloo on the rooftop of the Winnipeg Art Gallery. (WAG HANDOUT)

You don’t need to ask Mother Nature to bring igloo weather to Winnipeg, and thankfully for a group of builders at the Winnipeg Art Gallery, the temperatures have played in their favour.

Two igloos are currently being built atop the WAG by the Manitoba Urban Inuit Association (MUIA). The igloos have been constructed next to an inukshuk by Manasie Akpaliapik — just in time for the opening of an exhibition highlighting 115 Inuit works from the WAG’s collection.

“Because we have so much happening here involving Inuit art, we felt we wanted a connection to the Inuit people themselves,” said Aline Frechette, WAG art educator. “So we contacted the MUIA and Fred Ford, one of their board members, became our liaison. We discussed a number of issues, and Fred made this great suggestion of building an igloo on our roof.”

One of the igloos measures approximately 9 feet in diameter and 7 feet tall. Another will be completed by later this week.

The public can view the snowy creations with the price of regular museum admission.