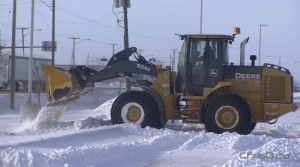 A front-end loader clears snow from a parking lot in Headingley, west of Winnipeg. (CHRISD.CA FILE)

The City of Winnipeg is expecting to spend $2 million on this latest cleanup, which will begin at 12 a.m. on Sunday, January 27.

This ban prohibits parking on any street designated as a snow route between midnight and 7 a.m. Vehicles parked in violation of the ban will receive a $100 ticket ($50 if paid early), and may be towed.

Approximately 300 pieces of equipment will be used.