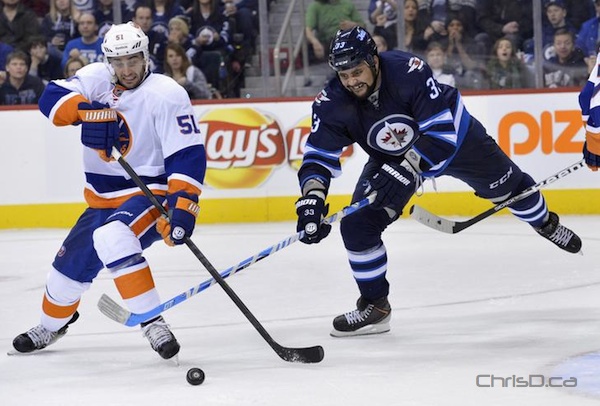 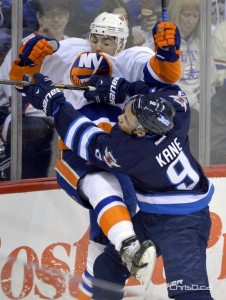 WINNIPEG — The Winnipeg Jets are making a name for themselves as a team with no quit by erasing two-goal deficits in their last two contests, and on Sunday night at MTS Centre, the Jets captured their third win in a row by edging the New York Islanders 5-4 in overtime to improve to 3-1-1 on the infantile season.

Following a brief booth review, Evander Kane’s rebound goal on an Olli Jokinen shot just under two minutes into the extra frame completed the comeback after trailing by a pair midway through the third. Kane now leads the Jets with three goals and is tied with Dustin Byfuglien for the team lead in points with six.

“It wasn’t a Picasso,” said Winnipeg head coach Claude Noel. “I was happy to see that we continued to battle even though we got down by a couple in the third. Obviously, the goal by Byfuglien was a big one. The play by (Alexander) Burmistrov was good, and we kept plowing through.”

The Jets played relatively well through 40 minutes, besides their three shotless power plays, carrying the momentum by outshooting the Islanders 23-15 and winning 24 of 39 faceoffs. But the third period brought trouble, as New York took advantage of Winnipeg giveaways and missteps, beating Winnipeg goaltender Al Montoya three times in a ten-minute span to start the period.

“This team really battled for me tonight. We could’ve been defeated there in the middle of the third period, but we battled back,” said Montoya after his first start of the season, fatefully coming against his former team. “The fans rallied around us. You can’t say that didn’t help. Just to come away with a win against a former team is something real special.”

“I think we all know that it wasn’t an ideal game for us,” added Noel, but the second-year head coach feels his team is moving in the right direction and establishing an identity.

“The leadership group has taken the room and has grabbed it and is trying to change things. We still have a ways to go, but we’ve played five games. Let’s put it this way; we’re happy to be 3-1-1.”

The Jets now head out on the road for three game tour through Montreal, Florida, and Tampa Bay, returning home on February 5 for a game against the division-rival Panthers.