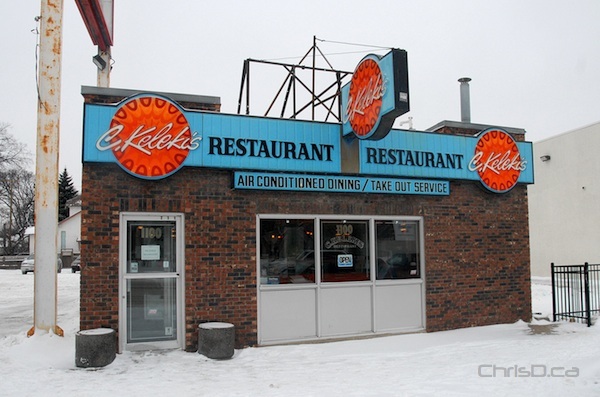 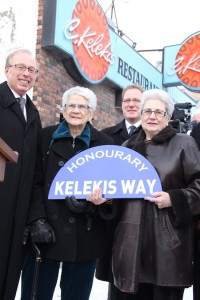 Mary Kelekis, second from left, with Mayor Sam Katz during a ceremony outside her restaurant on Wednesday, January 30, 2013. (SHANE GIBSON / METRO WINNIPEG)

After 81 years in business, Kelekis Restaurant on Main Street will close its doors on Wednesday.

The iconic Winnipeg eatery has seen a steady stream of customers ever since announcing in November it had planned to close. Longtime owner Mary Kelekis will be hanging up her apron for the last time, but not before the City of Winnipeg honoured the establishment this afternoon.

During a ceremony outside the restaurant, Mayor Sam Katz designated a stretch of street “Kelekis Way.” Sign toppers will be installed on Main between Aberdeen and Redwood Avenue to mark the designation.

“Kelekis Restaurant has been a neighbourhood institution since its opening,” Katz said. “The Kelekis family has warmly welcomed generations of Winnipeggers and visitors seeking a uniquely Winnipeg experience. “Kelekis Way acknowledges this contribution to our community.”

Chris Kelekis, Mary’s father, first opened the restaurant on June 10, 1944. He operated a food truck on the same location where the restaurant now sits in 1931.