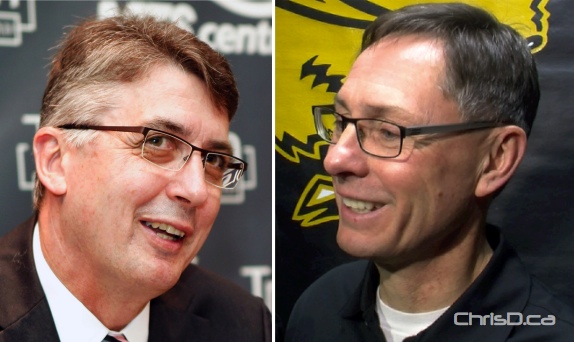 During the NHL lockout, players and coaches were scattered across the globe in an effort to keep busy and maintain their physical condition while waiting for the NHLPA and league to come to an agreement. For Winnipeg Jets head coach Claude Noel, a few of those off days were spent checking up on the Manitoba Bisons.

Men’s hockey coach Mike Sirant said on Wednesday Noel and fellow coaches Perry Pearn and Charlie Huddy visited Max Bell Arena occasionally to get a look at the Bisons squad. For Sirant, he returned the favour and stopped in at the MTS Iceplex from time-to-time.

Sirant and Noel go back several years, when Sirant was a guest coach with the Nashville Predators. Noel was the head coach of Nashville’s farm team at the time, the Milwaukee Admirals, where the two got to know each other.

“I got the chance to meet Claude back then and spend the week with him,” Sirant said. “I obviously learned a lot about the game.”

Noel and his assistant coaches shared ideas with the Bisons during the lockout, some of which the University of Manitoba team has adopted.

“Some of the concepts that they introduced at our practices … we’ve continued to emphasize those and instill them as part of our game plan,” Sirant added “It’s been effective and he’s had a great influence on myself personally in my coaching development through the years, and this year, a big influence on our team and our success.”

Sirant laughed at the idea of the Jets hopefully winning their two remaining road games this week so Noel is in a good mood next Monday. That’s when the Jets head coach will be a guest speaker at the Bisons’ hockey fundraiser being held at the Canad Inns Fort Garry.

“But knowing Claude, he’ll be in good spirits (despite any losses). He’s always such an upbeat, positive and passionate guy.”

Tickets for the fundraiser are still available at GoBisons.ca.

The Bisons host the UBC Thunderbirds (13-8-3) this Friday and Saturday at Max Bell. Puck drop is 7 p.m.