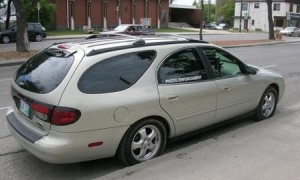 A photo radar vehicle on duty in Winnipeg (FILE)

A man has been charged for allegedly threatening the driver of a photo radar vehicle in the city’s North End.

Winnipeg police say on January 19, a man driving a Ford F-250 pickup truck pulled in front of a mobile photo enforcement vehicle in the area of McGregor Street and Anderson Avenue. The man is said to have made contact with the radar equipment, but didn’t cause any damage.

According to police, the man exited his vehicle and began yelling obscenities at the radar operator. The suspect drove off, but came back moments later where he drove into oncoming traffic and pinned his vehicle against the operator’s driver side door. Before leaving the scene, the suspect yelled at the operator again and allegedly threatened him.

A 49-year-old man was arrested in the same area on January 31 is facing charges of uttering threats to cause death or bodily harm, driving imprudently and obscuring his licence plate.