Home » News » Lake Winnipeg Named Most Threatened of the Year

Lake Winnipeg Named Most Threatened of the Year 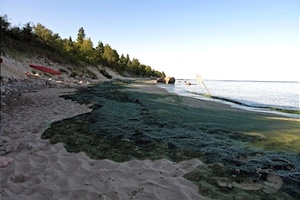 Lake Winnipeg has earned the dubious title of being named the Threatened Lake of the Year by the Global Nature Fund.

Nutrients in agricultural run-off and sewage discharges threaten the lake’s future by stimulating large amounts of blue-green algae that imbalance the lake’s food web and can be toxic to humans, the organization said on its website.

The Lake Winnipeg Foundation (LWF), which works to preserve the lake, says scientists have been warning about the future of the lake since 1969.

“They warned that we needed to decrease the nutrients that are causing the toxic blue-green algae blooms back then,” said Vicki Burns, outreach coordinator for the Lake Winnipeg Foundation in a release. “Yet, despite these warnings the action to clean up the lake has been very slow. However, the embarrassment that goes with a global recognition of such dubious distinction, is actually galvanizing the LWF and our important partners. We are more determined than ever to save our lake.”

The LWF is currently leading development of an action plan that will focus on science and is engaging and collaborating with key stakeholders in the Lake Winnipeg situation.

The Foundation plans on announcing the first stage of its sustainability plan for the lake in the coming weeks.