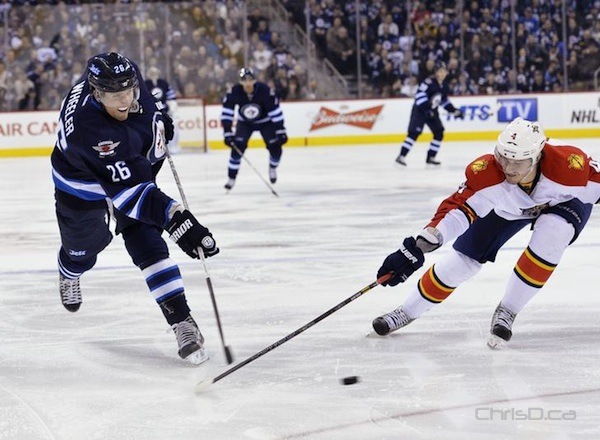 Winnipeg Jets’ Blake Wheeler (L) scores a goal on a slap shot past Florida Panthers’ Keaton Ellerby during the second period of play at MTS Centre in Winnipeg on February 5, 2013. (FRED GREENSLADE / REUTERS)

WINNIPEG — The road hasn’t proven kind to the Winnipeg Jets this season, so returning home may be just what the doctor ordered for the reeling club after an atrocious three games in four nights away from home last week.

And a shot of Vitamin C — that’s Confidence — may also be in the doctor’s elixir following their 3-2 overtime win over the Florida Panthers on Tuesday night.

With 15.2 seconds remaining in the extra frame, Winnipeg’s Bryan Little took a feed from Zach Redmond on the boards and ripped a wrister from the high slot, beating Scott Clemmensen high glove-side to give the Jets their fourth win of the season and bringing them back to .500 hockey at 4-4-1.

“It was probably our best chance on the 4-on-3,” said Little of his game-winning power play goal. “It’s nice to win again after a tough road trip, but it would’ve been nice to get the two points clean.”

“Their whole bench was telling me I was out of time so I didn’t really know who to trust,” said rookie defenceman Zach Redmond of his assist on Little’s goal, as he carried the puck past the Florida bench in the game’s waning moments. “I saw Little flying through the middle so I just tried to pop him a pass.”

The passed indeed popped, giving the 24-year-old Redmond his second helper of the night, and his first career NHL points.

Florida did escape with a point that will be added to their total in the Southeast standings, while Winnipeg leapfrogs Carolina for second in the division behind the 6-3-0 Tampa Bay Lightning.

“It’s great to beat the teams that are in your conference and your division,” said Blake Wheeler, whose team-leading fourth goal of the season tied the game up 1-1 early in the second period. “At this stage we’re just excited about getting on the board, getting two points, and hopefully it’s the start of a good thing for us.”

“Confidence probably isn’t the highest it’s ever been in this room,” added Wheeler. “But, at the end of the day what you need is… to get those wins. And when you get the win, morale builds. A few more smiles on the face, and then confidence comes with that.”

With the road causing so much strife for the Winnipeg Jets this year — 1-3-1 away from MTS Centre — winning on home ice will be critical to staying relevant in the playoff picture in this shortened 48-game season.

The Jets play four of their next five in Winnipeg, starting with a game against the Toronto Maple Leafs on Thursday, before playing nine of the following 11 on the road through mid-March.