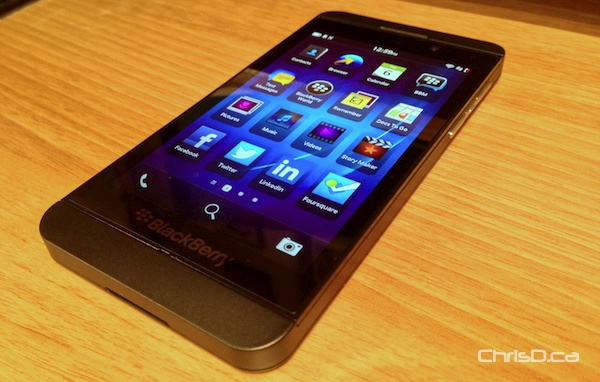 BlackBerry is looking to regain a chunk of the smartphone market with its new BlackBerry 10 platform and has released two new phones to help them accomplish that.

The company, formerly Research in Motion, released the BlackBerry Z10 on Tuesday. TELUS provided ChrisD.ca with a test unit of the Z10 to get a feel for the new device that’s expected to turn things around for BlackBerry. Once we’re done playing with it, we’ll be giving it away right here, so keep an eye out for a contest later this week. 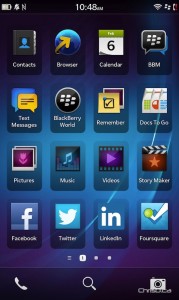 First impressions of the device have it looking more similar to the rival Samsung Galaxy S III than Apple’s iPhone 5. The plastic casing and rubber backing appear to be capable of taking a bit of punishment in a daily environment under normal conditions without completely kicking the bucket. The rear casing pops off easily to slip in the rechargeable battery and network SIM card, while its rounded edges and two-toned upper and lower strips mimic the iPhone 5 in the style department, but that’s where the similarities end.

You’ll find the volume rockers and voice command buttons on the right side of the device, while the power button and earphone jack are at the very top.

Boasting a 4.2-inch display with a 1280×768 resolution, the screen is a little smaller than the rival Galaxy S III, which critics have said is too big to begin with. The clarity of the Z10 is comparable to other smartphones on the market in the same class. Colours are sharp and crisp and even in direct sunlight, text and images are clear and viewable to the human eye.

The screen also acts as the phone’s “home” button, which doesn’t exist in a physical capacity. Users will quickly find out that finger movement is something they will have to get used to if they aren’t already. Swiping your finger up from the bottom to centre of the screen will bring you back to the main screen no matter what app you happen to be using at the time. From there, you can either exit an app entirely, or open another.

The rear 8.0 mega-pixel auto focus camera has a built-in flash with image stabilization and can also shoot video capable of 1080p HD. The camera was tested in both bright and low light situations and handled each one surprisingly well. The front-facing camera is 2 mega-pixels and can shoot 720p HD video. Both cameras have variable shooting modes to set the scene and choose from a 16:9 or 4:3 ratio.

The rear camera has room for improvement, especially with its so-called “stabilization” feature turned on. Even while holding your stands as still as possible, there is a fair amount of visible shaky movement going on. The other problem arises from the camera’s auto focus, which tries to find what you’re meaning to shoot and constantly works to find the right balance. If you’re shooting in low light, you can also turn on the camera’s flash, which remains static to act as a light source. For those who don’t necessarily need 1080p at their disposal, you can shoot in a lower 720p resolution as well. 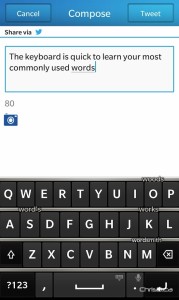 For those die-hard BlackBerry users that are afraid to move away from a physical keyboard to an on-screen version, the Z10 offers a comfortable alternative with its touchscreen features. The intuitive keyboard is quick to pick up a user’s typing habits and spell out common words or phrases automatically that can be inserted into text messages, e-mails, Tweets, etc. via the “swipe up” feature. The keyboard is accurate the majority of the time, producing less mistakes than some may experience on competitors’ devices.

The big sell behind the new devices are their completely reinvented operating system, BlackBerry 10. Included in the new OS is The Hub, which acts as an all-in-one location for your e-mail, SMS, BBM, Facebook, Twitter, Linkedin, calendar notifications and other items. From within The Hub, you can take care of everything you need to on a busy day without individually reopening the apps you were working in before. For example, you can reply to an e-mail and send out a Tweet from the same screen, and then swipe horizontally and browse through other areas of your phone while your tasks do their thing in the back-end.

Another feature is Peek, which allows you to preview what’s in The Hub by swiping the screen horizontally once again and seeing what needs attention and what can wait. Flow comes into play as being the go-to concept to navigate home without the option to push any physical buttons. Using mainly your thumb, you can swipe your way from the left or right and bottom to top of the screen’s glass to determine what task you want to accomplish. 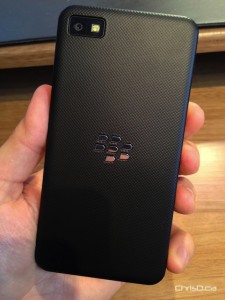 The rear side of the BlackBerry Z10 (CHRISD.CA)

The BlackBerry Z10 is truly a remarkable creation and will no doubt make a dent in the smartphone market where iPhone and Android currently reign supreme. The device is beautifully designed and includes LTE and NFC support.

The screen at times can be finicky to recognize surface sweep and swipe movements, but it also depends on how much pressure you leverage while doing these tasks, and how far you move your finger up the glass.

Users will notice a few built-in apps upon starting the Z10, such as Facebook, Twitter, LinkedIn and Foursquare. Social media users will appreciate this, but it may not be for everybody. On the other end, BlackBerry World doesn’t exactly rival the App Store when it comes to mobile offerings, including an Instagram app. However, if taking photos and adding filters is your thing, there are dozens of others readily available.

The Z10, which comes with 16GB of built-in storage, is available in black or white.

To celebrate the launch, from now until February 28, TELUS is offering customers an additional $50 in-store credit when they trade-in their previously enjoyed device at a TELUS store and purchase a new BlackBerry Z10.