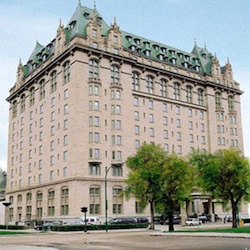 The Fort Garry Hotel is celebrating its centennial year with a fun trivia adventure aimed at knowing your local history.

Winnipeg 1913 Trivia Hunt begins Monday, February 11 and signals the start of a 10-month trivia journey through Winnipeg’s storied past, where players will compete in a series of online quizzes and challenges.

“The game is an excellent way to learn something you may not know about Winnipeg’s history, and interesting facts about the Fort Garry,” said the hotel’s managing partner Ida Albo. “We wanted a celebration that is accessible to the public, and the game allows us to include everyone that wants to celebrate with us.”

Local author and historian Jim Blanchard will write the trivia clues and promises to make them fun and “not too hard” to answer.

Top finishers will be entered into a monthly draw to win prizes, including tickets to the 2014 Juno Awards in Winnipeg, Taylor Swift concert tickets, Ten Spa packages and other prizes. The grand prize of one Ten Spa service each week for a year, valued at $6,500, will be awarded in December at the grand finale celebration.

For more information and to register for free, visit Winnipeg1913.com.