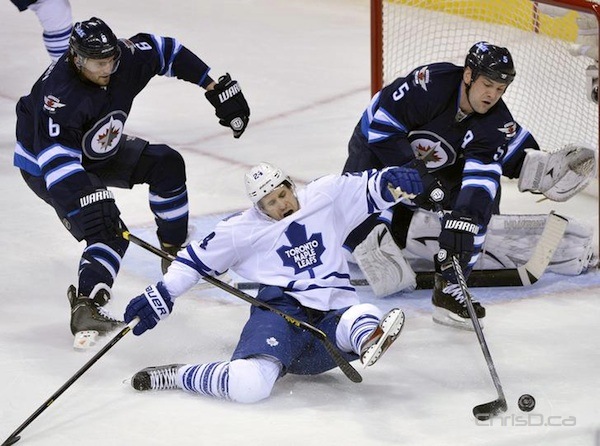 WINNIPEG — The Winnipeg Jets let a 2-1 third period lead slip away on Thursday night, as Phil Kessel and the Toronto Maple Leafs won their fifth road game in six attempts this season with a 3-2 victory over the home side.

Following an untimely holding penalty to Winnipeg’s Alex Ponikarovski with 4:36 remaining in the third, Kessel took a drop pass from Tyler Bozak and fired a wrister from the top of the circle over Ondrej Pavelec’s glove to put the Jets at 3-2-0 on home ice and 4-5-1 overall on the season.

“We let that game get away,” said a clearly distraught Jets bench boss Claude Noel. “To say I’m disappointed would be an understatement.”

“I thought we were a little bit tentative about eight minutes to go in the game,” added Noel. “(We were) almost sitting back on our heels rather than putting pressure. We struggled a bit in our zone, even against their fourth line.”

“Overall, I don’t think it was such a bad game,” said Little, who had first assists on both of his team’s goals to give him seven points in 10 games. “I thought there was a lot of good things we did, but at the end of the day when you have a 2-1 lead in the third you’ve got to be smarter. You’ve got to learn how to close out those games.”

“We knew we’d have to weather a storm,” said Leafs forward Tyler Bozak after his one-goal, one-assist night. “It’s a tough building to come into and play. The fans are loud. The Jets are a good team and they always come out hard in the first. We didn’t play our best in the first two periods but it is the road and you got to win however you can, and we’ll take it.”

Rookie Winnipeg defenceman Zach Redmond scored his first career NHL goal shorthanded to give the Jets a 1-0 early in the second as Little fed him cross-slot on a two-on-one rush.

“It’s something you always dream of,” said the 2008 seventh-round pick of the Atlanta Thrashers. “I never thought it would come on the (penalty kill), but I’m definitely happy to get the monkey off my back.”

The Jets fly to Ottawa first thing Friday morning to prepare for their matchup with the Senators on Saturday afternoon at 1 p.m. central. Winnipeg’s home schedule doesn’t get any easier as MTS Centre plays host to the Flyers, Penguins, and Bruins on Tuesday, Friday, and Sunday next week.