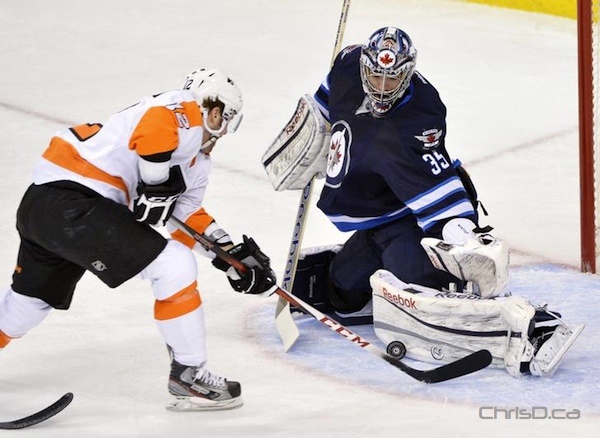 WINNIPEG — A Winnipeg fan-favourite of a different kind came to MTS Centre on Tuesday night, and lead his Philadelphia Flyers to a 3-2 road win over the Winnipeg Jets.

Philly netminder Ilya Bryzgalov, who shook off 24 of 26 shots as well as a smattering of chants and boos from the Jets faithful, still holds many Jets fans’ ire for comments he made well over a year ago, describing Winnipeg as a city with “no parks,” “too cold,” and “boring for families.” But the former Phoenix Coyotes goaltender didn’t seem to mind the attention.

“They don’t cheer anything bad. They just cheer my name,” said the 32-year-old Russian. “The Jets were rested and full of energy with the support of the fans. We survived the storm.”

A storm indeed it was at times, with Winnipeg finding many chances in-close on Tuesday, but ultimately failing to convert on most.

“We played in spurts,” assessed Jets head coach Claude Noel. “I thought we had enough chances to gain momentum.”

But when questioned further about his team playing with urgency — trailing 2-1 for the bulk of the game — the Jets bench boss offered his own theories.

“Is it urgency, or is it frustration for lack of success in times we had some point-blank shots? We had some opportunities there where we put it right on him from the hash marks. Does that drive frustration? Does that make you disappointed, make you frustrated? Those are all negative emotions. Is it urgency? It’s hard to say.”

Team captain Andrew Ladd equates his team’s effort with something familiar for the 5-6-1 club.

“Same old 40 minutes that we played well and we did things that we liked,” said Ladd, who scored both Winnipeg goals to put his total at six on the season. “And then (we had) some inconsistencies in other parts of our game that cost us and we ended up staying in our own end too long. And then we didn’t bury our chances when we had chances to get back in the game.”

Between the second and third periods, Winnipeg was forced to pull goaltender Al Montoya from the game due to an injury he suffered late in the second. He will be assessed further over the next couple of days, but it is suspected at this time to be a minor lower-body ailment.

Before the team endeavors into a nine-of-eleven games on the road stretch through mid-March, the Jets host the Pittsburgh Penguins and Boston Bruins at MTS Centre on Friday and Sunday evening, respectively.