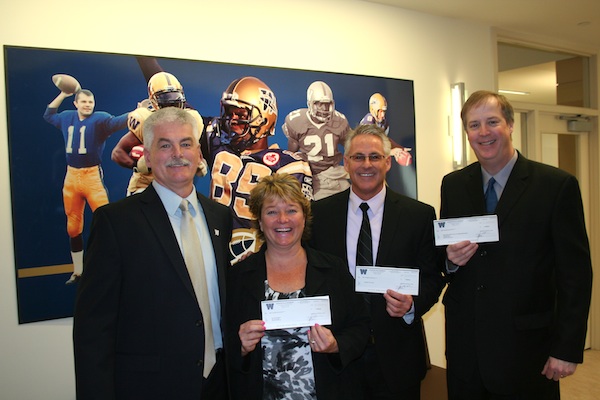 Three local non-profit community organizations have received $8,000 each from the Winnipeg Blue Bombers.

Siloam Mission, the Manitoba Sports Hall of Fame, and Hunger for Hope through Winnipeg Harvest received the funds as raised through the Canadian Football Hall of Fame weekend last November.

“The funds raised for Hunger for Hope recently passed the one million dollar mark after five years of hard work, including by Garth Buchko who played a major leadership role in developing and promoting the initiative,” said Steve Dubois of Hunger for Hope.

Siloam Mission will use its funds to help their clients stay warm in extreme winter temperatures, while the Manitoba Sports Hall of Fame will implement programming at its new Museum Gallery at 145 Pacific Avenue.