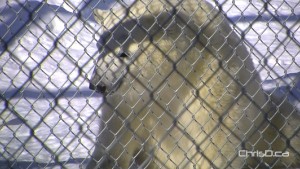 Hudson the polar bear received a hero’s welcome Thursday when he made his public debut at the Assiniboine Park Zoo.

Met by throngs of media, flashing cameras and the general public, the 16-month-old bear from the Toronto Zoo is currently being housed in the International Polar Bear Conservation Centre (IPBCC). Hudson arrived in Winnipeg late last month and needed a few weeks to get used to his new surroundings before he could be shown off.

“He’s very relaxed in his new home and he certainly loves the snow and winter weather,” Tim Sinclair-Smith, director of zoological operations, said earlier this week.

Dignitaries gathered near the zoo’s east entrance for some brief remarks before swinging the gates open to the polar bear enclosure. Margaret Redmond, the Assiniboine Park Conservancy’s president and CEO, was presented with a custom Winnipeg Jets jersey bearing Hudson’s name and the #1 by Mayor Sam Katz and Premier Greg Selinger.

Hudson also had a snow sculpture created in his honour at the Manitoba legislature, as carved by four dedicated artists.

Hudson will be the first bear to move into the upcoming Journey to Churchill exhibit opening in 2014. Visitors can see him during regular zoo hours from 9 a.m. to 4 p.m. daily.