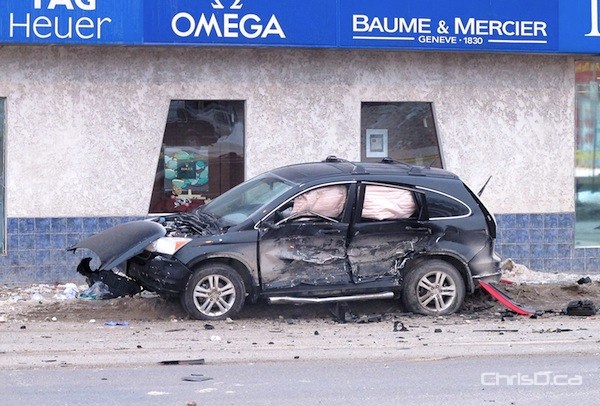 A Honda CRV was one of two vehicles involved in a serious crash at Notre Dame Avenue and Isabel Street on Friday, February 15, 2013. (STAN MILOSEVIC / CHRISD.CA) 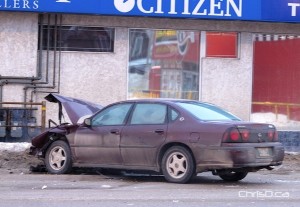 A serious two-vehicle crash on Notre Dame Avenue Friday morning has claimed the life of a 53-year-old woman.

The collision happened at around 6 a.m. at Notre Dame and Isabel Street in front of Independent Jewellers. A Honda CRV and Chevrolet Impala could be seen badly damaged.

Police confirmed there were injuries associated with the crash, but later said a female pedestrian had succumbed to her injuries in hospital.

UPDATE: Monday, February 18 — The driver of the Impala fled the scene of the crash and is now facing charges. Police arrested Dakota Dennis Smoke, 18, on Sunday, February 17 in the northwest part of the city. He has been charged with driving dangerously causing death, four counts of driving dangerously causing bodily harm, impaired driving causing death, four counts of driving impaired causing bodily harm, failure to stop at the scene of an accident, novice driver driving without a supervisor, and breach of probation.

← Previous: Fun in the Snow for Dogs and Their Owners Next: Blue Bombers Re-Sign Bryant Turner →
Tags: Accident | Winnipeg Police