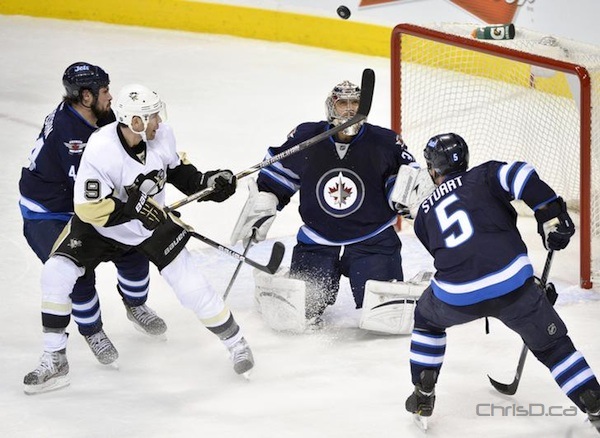 WINNIPEG — Following a poor effort at home on Tuesday, the Winnipeg Jets rebounded with a solid outing against the Pittsburgh Penguins on Friday night, but ran in to a hot goalie in a tightly fought 60 minutes at MTS Centre.

Pittsburgh goaltender Marc-Andre Fleury earned first-star honours, stopping 25 shots — including a barrage of quality Winnipeg chances from in close in the second period — as the Penguins topped the Jets 3-1.

“I thought we gave ourselves a chance to win and didn’t sell ourselves short,” said Winnipeg captain Andrew Ladd who netted his team’s only marker with under two minutes remaining in the game to make it 2-1. “We bury a couple of those chances in the second period — a totally different game.”

“I thought our effort was a lot better,” said Jets defenceman Zach Bogosian following his first game back since having wrist surgery on August 31. “Fleury came up with some big saves for them. A couple of those scrambles in front, we’ve just got to find those and pound those home.”

Trailing 1-0 midway through the third, Winnipeg’s Zach Redmond (interference) and Mark Stuart (tripping) took penalties 23-seconds apart to give the dangerous Pittsburgh power play 1:37 of 5-on-3. The two-man advantage resulted in James Neal’s eleventh goal of the season from Evgeni Malkin and Sidney Crosby.

Winnipeg’s leading scorer this season, defenceman Tobias Enstrom, suffered an upper-body injury just over two minutes in to the game on a clean check by Pittsburgh’s Pascal Dupuis. Head coach Claude Noel wouldn’t specify the exact nature of the injury saying only, “When he came off, he looked to be in pretty big pain… it’s not going to be day-to-day.”

It is suspected to be Enstrom’s right-shoulder.

The Jets wrap a three-game homestand on Sunday against the Bruins before taking on 9-of-11 games on the road.