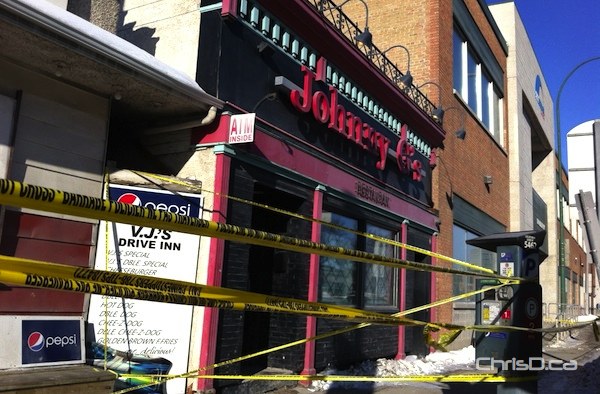 A 24-year-old Winnipeg man shot at Johnny G’s restaurant on Main Street on Friday, February 15, 2013 has since succumbed to his injuries. (STAN MILOSEVIC / CHRISD.CA)

A man shot at a Winnipeg restaurant early Friday morning is the city’s latest homicide victim.

Police were called to Johnny G’s on Main Street at Broadway at around 2 a.m. after a reported shooting.

Officers found a male suffering from a gunshot wound and transported him to hospital, where he later died.

The victim has been identified as William Edward Moar, 24, of Winnipeg.

UPDATE: Friday, March 8 — Police have charged Akech Dut Ajak, 22, of Winnipeg with first-degree murder, along with a 15-year-old male youth who was arrested in Calgary. Both suspects remain in custody.

← Previous: Snowboarders to Compete in 'Snow Jam' at The Forks Next: The Trews, Odds to Perform at Dauphin's Countryfest →
Tags: Crime | Death | Winnipeg Police