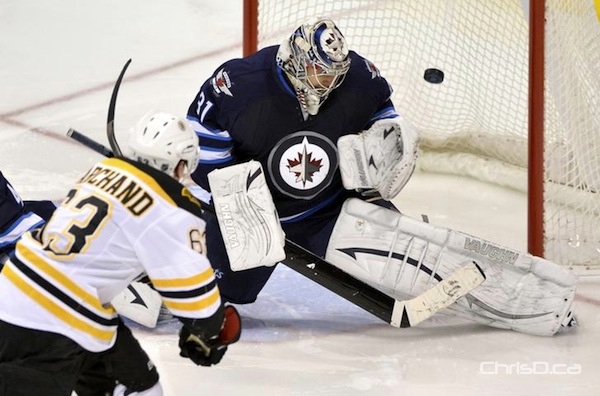 WINNIPEG — A back-breaking goal with only two seconds left in the second period helped the Boston Bruins hand the Winnipeg Jets a 3-2 loss Sunday at MTS Centre.

The Jets appeared to grab momentum in the last minute of the second period when Evander Kane took a pass from behind the net from Alexander Burmistrov and buried his own rebound with only 27 seconds left in the period to put the Jets up 2-1, but the Bruins tied the game up with only two seconds left in the period when Daniel Paille deflected a point shot from Johnny Boychuk.

“There were a few mistakes on that and it ends up in out net,” said Jets head coach Claude Noel. “But you can see the importance of getting pucks to the net. All they did was get the shot through and redirected it and it’s in our net.”

From there, it was a disastrous start to the third for the Jets as Ron Hainsey took a tripping penalty nine seconds into the period and the Bruins capitalized only 17 seconds later when Brad Marchand took a pass from Patrice Bergeron and put a backhander behind Ondrej Pavelec to put the Bruins up 3-2.

“I’m pretty disappointed in the game because I thought we battled,” said Noel “We put more shots on the net. It’s disappointing the fashion in which we lost the game.”

After both teams went scoreless in the first period, the Jets opened the scoring 1:43 into the second when Alexander Burmistrov fought for a rebound from a Zach Bogosian shot from the point, and snapped it past Bruins goalie Tuukka Rask to put the Jets up 1-0 and ignite the 15,004 at MTS Centre.

The Bruins tied the game at 10:57 of the second period when a shot from the point from Zdeno Chara was tipped by Tyler Seguin and went into the net off Jets defenseman Ron Hainsey.

The Jets pulled Ondrej Pavelec in the last minute of the game and almost tied it up with a late flurry but couldn’t get the equalizer.

The Jets now leave the confines of the MTS Centre for five straight road games starting Tuesday in Buffalo and goalie Ondrej Pavelec said these next few road games are crucial.

“I don’t want to say it’s the most important road trip of the season but the next five or six games are going to be huge,” said Pavelec. “If we’re not going to play well on the road we’re going to be in big trouble.”

The loss was the Jets third in a row and fourth in a row at home and drops the team to 5-8-1 on the season while the Bruins now sit at 9-2-2.