Inside the Ice Donkey Winter Adventure 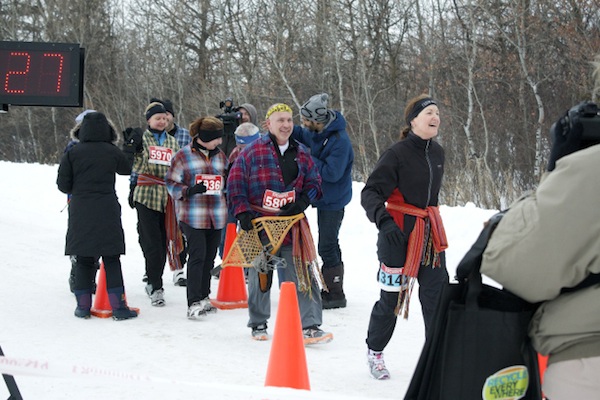 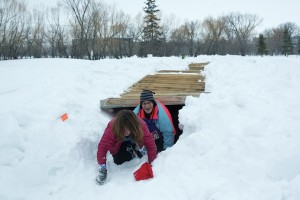 Since its inception in 2007, Swamp Donkey Adventure Racing has gained a reputation for challenging people to push their limits. They inspire the inactive to get off the couch with their slogan, “Get Off Your Donkey”.

On Sunday, February 10, 2013, the first ever Ice Donkey Winter Adventure took place. It marked the fourth type of adventure racing held throughout the year by the Swamp Donkey Adventure Racing group.

The 5km race was held at the former Southwood Golf Course at the University of Manitoba. The race is generally completed within two to three hours and includes many different types of obstacles to be overcome. Participants give it their all when it comes to running as well as snowshoeing, ice biking, and skating. They compete against others either in teams or by flying solo. Fortunately, many Winnipeg residents are built to stand the cold and whatever winter throws their way.

Racers are told to dress “warm and crazy” for this event. I did a bit of winter running a couple of months ago and found the key to dressing properly for outdoor winter sporting events is to dress in layers. 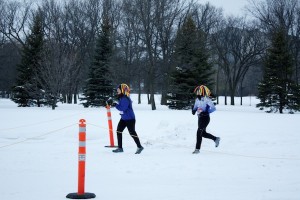 Wackiness is also encouraged, especially if you are running in a team. I saw a voyageur team, a team wearing T-shirts that said, Yellow Snow Dogs, a group of guys wearing full body suits with Luchador masks, and many crazy and wonderful toques.

Racers were lucky that it was an almost balmy, high of -3°C last Sunday, with no precipitation. It was the perfect conditions for a winter race.

I didn’t see all of the obstacles involved in the race, but the ones I did see looked like a lot of fun, if a little bit daunting. The scariest obstacle that I witnessed involved crawling through what looked like a very long snow tunnel with a wooden plank ceiling. When talking to a couple of emergency medical aids on site, they said that many people feel claustrophobic inside its narrow, dark centre. This is especially true if you have someone directly in front or behind you in the tunnel, narrowing your crawl space even further.

People also had to scale a couple wooden walls. Some were climbable, others required a boost from someone. If you were competing as a solo participant you had to find a stranger to help boost you over the Winter Wall of Shame.

There was also a large snow mountain that participants had to climb. At the top were about five or six girls wearing football jerseys with shoulder pads and eye black. They held onto big soft covered cylinders that were used to try to push people off of the mountain.

The Ice Donkey Winter Adventure race website lists the different names of the different obstacles people will conquer during the race. There are short descriptions that hint at what the obstacles might involve. However, the description leaves a lot to be discovered. Some of these names are, The Frosty Firing Lane, Winter Spider Web, Frigid Ladder Climb, and the ominous sounding, Lick the Pole. Not knowing what these obstacles involve add an element of surprise and more excitement to the event. 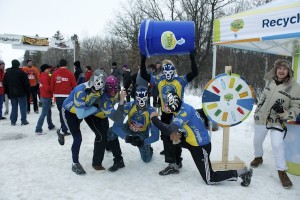 A team dressed as Mexican wrestlers competed in the race. (EDEN RAMSAY PHOTO)

Swamp Donkey Adventure Racing also has three other events that it puts on throughout the year. The Swamp Donkey Adventure race is the group’s signature event. In 2011 it was the largest adventure race in Canada. The race takes place in the fall and is set in the wild Canadian Shield of Manitoba. People participate in teams of three on an unmarked course for six to nine hours equipped with a map and compass to find checkpoints throughout the designated area. This race features hiking, paddling, and mountain biking to reach the finish line.

In the summer, The Pain in the ASSiniboine Urban Adventure is the featured event. It takes place in Winnipeg and involves bicycling along scenic trails and paddling along the Assiniboine River. The track runs along the Trans Canada Trail to the picturesque Beaudry Park and then finally leads to the iconic Forks.

The Dirty Donkey Mud Run also takes place in the later summer at the Springhill Winter Park and Oasis Resort. This 5km course gets its participants down and dirty. Participants have to trek through mud puddles, climb walls, crawl under barbed wire, and through tunnels.

If you are looking for something fun to do while being active, getting outside, and testing your mettle, sign yourself up for one of Swamp Donkey Adventure Racing’s next adventures. By the looks of it, you definitely will not regret it.