Home » News » Amphibex Icebreakers Get to Work on Red River

Amphibex Icebreakers Get to Work on Red River 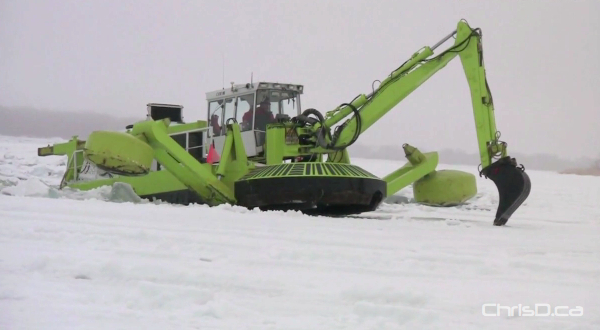 An Amphibex icebreaker works on the Red River in Breezy Point. (CHRISD.CA FILE)

The Manitoba government has unleashed their Amphibex icebreaking machines on the Red River north of Selkirk to alleviate ice-jamming and potential flooding in the area.

“Working 24 hours a day, our icebreaking machines and personnel make us world leaders in ice-jam prevention,” Premier Greg Selinger said on Wednesday near Netley Creek. “These machines, and the 28 dedicated people who operate them, work to protect thousands of Manitoba families and their properties and are an important part of our overall flood-fighting efforts.”

The province began ice cutting last week, where ice is thicker than normal at between 24 and 30 inches. Should ice jams occur in other areas, the 24-ton machines can be transported by truck to break them up.

Notices have been posted in areas where the Amphibex machines will be working as a safety reminder for ice fishers, snowmobile enthusiasts and river users.

On Thursday, the National Weather Service in the U.S. will release its spring flood outlook for the Red River and Devils Lake Basin. Manitoba will follow with its own forecast on February 27.